If you’re a native Californian, you’ve likely made a trip to see the vivid poppy field reserves across the state. While they’re at peak bloom in the spring, poppies have the distinction of being the August birth flower and the California state flower. This month, we are featuring the delicate beauty of poppies along with the statuesque gladiolus, another flower symbolic of August births.

And we’ve paired these flowers with peridot, sardonyx and spinel crystals — all birthstones for August babies. 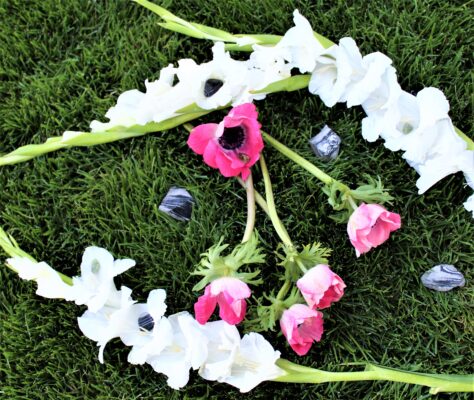 Poppies, with their glorious paper petals fluttering gently in the breeze, light up fields, bluffs, and hillsides throughout the spring.

Part of the “Papaveraceae” family, dozens of poppy varieties exist all over the world, including the golden-hued California Poppy (Eschscholzia californica), which has been the official state flower since 1903. While they grow wild throughout the state, they’re illegal to pick on state reserves.

The opium poppy is perhaps the most widely known genus for its medicinal seeds, which contain small components of opium, heroin, and codeine. These so-called “joy plants” are said to have been the catalyst for the Opium Wars of the mid-1800s.

Poppies have inspired literature throughout history. One of the most enduring poems is “In Flanders Field,” written by a WWI soldier after seeing bright red corn poppies peek out among the ruins of the battlefield. The poem led to poppies being used as a symbol of remembrance in Europe and the U.S. for lives lost during the war.

Meanwhile, the grand gladiolus flower is also used to symbolize remembrance in addition to strength of character, faithfulness, and moral integrity. Translated from Latin as “little sword,” gladioli are said to pierce the heart of their recipient causing infatuation. Reigning from South Africa, these summer-blooming flowers were first brought to Europe in the mid-1700s where many hybrids have since developed. Gladioli, which can grow up to five feet tall, look striking in gardens and vases alike.

As always, our beautiful floral arrangements are enhanced by the magic of crystals!

In August, there are two traditional birthstones, the Peridot and Sardonyx. An additional choice for this month is Spinel, which is a crystal that’s a bit late to the birthday party. Spinel joined the official August birthstone list as recently as 2016.  All three crystals are said to have the ability to heal negativity.

Feeling stuck or unfocused? Spinel has a powerful healing energy that renews your mind and spirit. Associated with the root Chakra, spinel has realignment properties that allow you to focus and take in the beauty of the world around you. Originally found in Burma, the shimmery crystal comes in brilliant shades of pink, red, blue, yellow, green, black, and brown, but can also be transparent.

Often confused with rubies, this rare natural gem has historically been under-rated because of the use of synthetic spinel in costume jewelry. But natural, sparkling spinel is equally as beautiful and treasured. In fact, an uncut red spinel, thought to be a ruby for centuries, is one of the British crown jewels.

With its yellowish-green hues, the peridot is the perfect crystal to signal the end of summer and beginning of fall. Created inside the molten rock of the earth’s upper mantle, peridot is found in different places around the world, which naturally creates slight shade variances tied to each area’s geographical make-up.

A peridot crystal brings forth beneficial healing energies known to regulate life cycles and address depression. It can also release nervous tension when placed on the Solar Plexus where your diaphragm rests.

Sardonyx is an empowering crystal that promotes happiness, optimism, and confidence. Created by sard and onyx—two types of layered minerals — sardonyx is often used in brooches, intaglios, or rings to show off its dramatic bands of red, brown, and white. While sardonyx is widely available and relatively inexpensive, that doesn’t detract from the crystal’s unique properties and beauty.

Proper care of your beautiful gemstones and crystals will help you to enjoy them for many years.*

When you gaze at your gorgeous arrangement this month, be sure to focus on the strength and positivity you bring to this world. Flowers have the amazing ability to bring light into your life. Share that joy with loved ones who surround you!

* Wash in warm, soapy water and dry with a soft cloth. Keep them away from chemicals such as alcohol and ammonia.